This is an open brief which allows me to choose my own data to visualise.

A multimedia installation that showing the air quality difference.

User control interface: The mask itself.

Brief version 1: Visualising the value of GBP over the past few years.

The exchange rate of GBP may not seem that relevant to daily life for the locals but is always crucial to overseas students. When I first came to the UK, 1 GBP = 16 CNY, now less than 9 CNY. I wanted to visualise the data and put it side by side with the purchasing power of GBP, and the top headlines of each year. Although the events may not be the cause of the exchange rate fluctuations, it would be interesting to look at and allowing the audience to make their own judgement.

During the first a few weeks, I tried to gather as much data as possible for my brief, as well as thinking about the way to present the visualisation with a physical control mechanism. A few ideas were generated such as using the audience’s location as a controller to allow them to walk along a timeline to view the relevant visual pieces, or giving multiple audience information according to their locations. 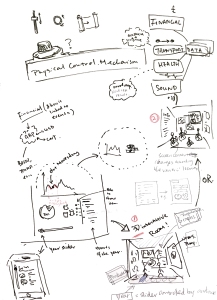 Using the exchange rate and purchasing power of British Pounds, to illustrate a bigger picture of the worth of GBP over the past a few years. And use News Headlines to provide some historical background to help people to recall. (Royal Wedding, Olympic, Brexit…etc.)

However, after doing research, I found there are already a lot of data visualisations about this topic. Moreover, the properties of my chosen data determine that they are expected to be shown in a precise way. Therefore, I started to reconsider the topic of the brief and asked myself what I really care about. Then I found that I would like to make people become more aware of the air pollution problem.

In some big cities in China, people need to wear masks on a daily basis, and they seem to get used to it. I thought it was only in a few extremely busy cities but soon realised I was wrong when travelling in Europe last Christmas (2016). I came across a foggy day in Krakow, where I got sick after one day staying outdoor. But my friend travelled with me told me that kind of air condition is very common in her home city of China. I suddenly realised how serious the problem is, from the feeling of my body, and started to imagine how helpless it is when someone has to live in such an environment for years. Therefore, I have chosen this topic and wish I could share what I have experienced.

As the data I found is very limited (the latest figure of different cities is from different years), I try to make it into a form of storytelling rather than using chart or graphs and showing the numbers.

After eliminating the ideas of building a lung theme room, projecting sky on the ceiling, project colours on the walls of a room, using lighting effect, showing infographics when people step on different parts of a map, …and so on. I decided to use sound only to indicate the PM2.5 and PM10 level. There will be an installation that records the audience’s breathing sound, simultaneously manipulate and play it back to the audience.

I analysed data from WHO and picked a few cities from the top 10 list of the most influential cities in the world.

When finalising the idea, I tried to find out the best technique to realise my idea. I was told MAX/MSP would be good for dealing with sound. It is very different from all the software I have used before and I have spent a lot of time watching tutorials online and tried to familiar with the way it works.

I bought a microphone and some cables to test what kind of microphone can receive the sound of breathing and thought it would be better to use a wireless microphone to give more freedom. 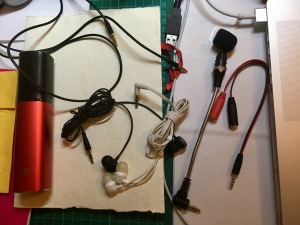 I was also considering to put something in front of the mic to gather the considerably weak breathing sound. 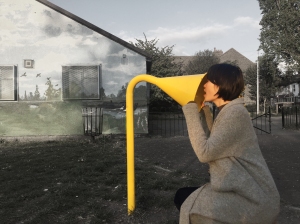 I had the inspiration from a speaking tube in a playground, where I can clearly hear my friend’s whisper from the other end.

Then I started to look into different air filtering mask and thinking if it would be suitable to use one for sound gathering, as it fits my topic perfectly, and would make a good cover for the microphone.

As I struggled to find suitable equipment for sound recording, I went to meet the technician of sound art design Paul. He recommended me to use the Lapel Microphone and a Zoom H4n Portable Digital Audio Recorder. Paul also introduced me the software Ableton Live and told me that it would be easier to use for what I want. However, I felt that it may not be enough time for me to pick up a new software, so I stick with MAX7.

While choosing the suitable mask, I was also thinking about the interaction between the installation and the audience. The initial idea is to allow the end users to choose the city they want to experience, by using buttons or sensors which detect the end users’ location.

In the end, I decided to only provide an on/off option, and the cities should change automatically. I would like to have a sensor that can detect whether the mask has been picked up. I asked for and discussed the available sensors with Oliver, then decided to test the light sensor, as it matches the setup style I want.

Then I asked Tom for the components I needed and managed to wire according to the diagram he drew for me, and get the Arduino code working. The code will return a value that represents the lighting level, which can then be used to determine the status of the mask.

I tried to make MAX7 to work with the Arduino, as well as ordered mask as it was near the deadline. I choose the one with more space inside to allow space for the microphone. 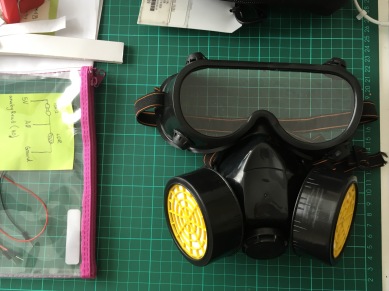 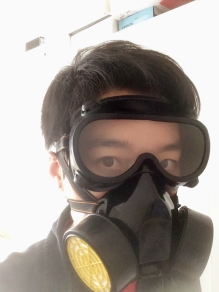 I then removed the eye protector and tried to make a hole to allow the microphone to go in. After going to the 3D workshop, I realised it would be easier to make a hole with a hole puncher.

Then I tried to make a box to hide the Arduino. I cut out two pieces of paper the same size as the boards with additional space for the cable, then used them to measure the box I was making. I cut foam board into strips and stuck them on the cardboard to stop the Arduino from moving. 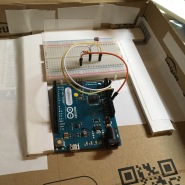 However, I was not satisfied with the box so I made a second one. 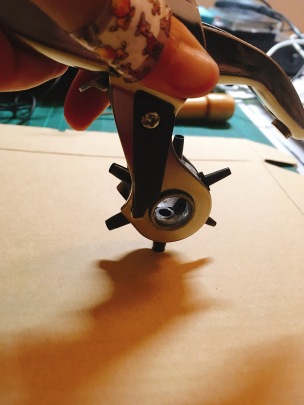 I had the main physical parts of my project up to this point, but still struggling with MAX7. I visit CSM a few times to see the technician Jeremy there, I tried out different filters and settings for manipulating the breathing sound, and made video clips for the chosen cities. Finally, I had my final version of MAX7 patch the day before crit.

Unfortunately, the program worked on testing but did not work when it connects with the Arduino. Another two hours were spent on solving the problem before I presented the project. 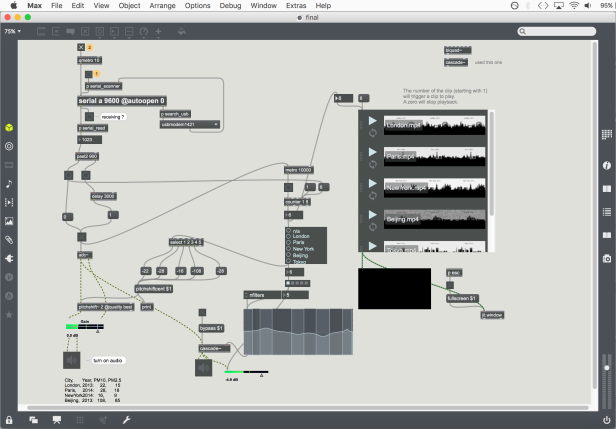 The ideal setup would be in a room like a photography studio, as on the sketch. 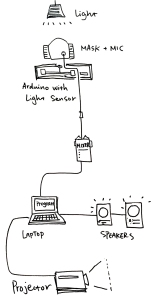 However, I had to adapt to what I could do and have the project set up in a small office. I use a torch to produce the light and projected the video on a wall.

I found this project provides a lot of freedom for exploring areas I did not know and allows me to adjust the brief according to my interests. The drawback of this kind of open brief might be that everyone needs different knowledge and support. We need to queue for Oliver to answer questions one by one, and sometimes he does not have enough time to do so if the question needs more time to explain. Also, the Arduino workshop happened quite late, left me with little time to do more experiments before submission. Nevertheless, it exercised my ability of problem-solving and time management, forced me to go out of my comfort zone to seek help, which is essential nowadays.

• Finding a new way to visualise the data
• Finding out the suitable tools (hardware and software)
• To alter things and make them work
• Learning to use Arduino and Max7  Out of all these challenges, the biggest one is how to make the MAX7 program work, as it is very different to all the other software I have used, and the existing tutorials online are not relevant to what I wanted to achieve.

I purposely add a few seconds delay before the video and sound effect activated, to allow the end users put the mask on their face. However, it was pointed out that it should react to the action immediately, as an interactive device, to avoid confusion. I think a solution would be showing a graphical instruction for a few seconds before starting the sound effect.

I projected the cityscape of the cities, their names and the year of the pollution data taken, synchronously with the sound effect. From the feedback, I agreed that it is not necessary to show the cityscapes and it may be better to provide more obvious visual effects.

I only tested the sound effect with the headphone as I do not have speakers at home. I only found out the sound effect differences between cities are sometimes very difficult to tell in the final stage. As shown in the screenshots, some sound effects are very similar. I could either improve it by using a set of better quality speakers or make the mask come with a headphone.

The final outcome video reflects what I have done after submission. It is pitiful that I couldn’t go much further with the idea due to the resource and knowledge limitations. I think it would be interesting to have an all-in-one helmet with a headphone and a VR glasses (instead of a 2D projection) showing real street view, which can provide the user with a more immersive experience.